At Home, but with No Supplies: Difficulties Faced by Survivors in Their Homes

AAR JAPAN has been making efforts to support hard-to reach disaster survivors who remain in their homes. On April 11th, AAR JAPAN’s Ayumi YASUDA delivered supplies to two homes in Ishinomaki City. This is her report.
There’s Food in Town, but…
In Daikaido, Ishinomaki City, we delivered diapers and wet wipes, baby food, toys, children’s clothes, milk, juice, high-pressure washers and boots to about 30 kindergartners and people who have remained in their homes in the neighborhood of Eiko Church and Eiko Kindergarten.
Although her car and furniture were swept away by the tsunami, church member Tomiyo HOSOKAWA has remained in her house. Her gas was finally reconnected the day before (the 10th), but the bath in her house is broken, so she has been bathing at her neighbors’ houses.
There are many people in the area who escaped from the Ojika Peninsula, which suffered tremendous damage from the earthquake and tsunami. Many fled with nothing but the clothes on their backs, and they have been relying on relatives in the area.
One month has passed since the earthquake, and access to food is improving, with some shops reopening and relief supplies being provided at evacuation centers. But people still lack cars with which to acquire supplies, and even those who can get ingredients may have nothing with which to cook them. 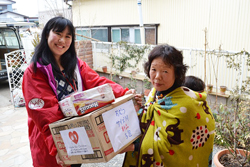 Tomiyo HOSOKAWA (right) said happily, “People who escaped from the Ojika Peninsula with little children have been waiting for these diapers.” (Left: AAR’s Ayumi YASUDA.)

Working to Prevent the Isolation of the Elderly
Miyako SAITO is an elementary school teacher in Fudo-cho, Ishinomaki City. We delivered supplies to her house as requested, including milk, juice, garbage bags, mouthwash (used in place of tooth-brushing), antiseptic gel, moisture cream, and so on.
Located at the mouth of a river, Fudo-cho was significantly affected by the tsunami. Electricity and water have finally been restored, but gas has yet to be reconnected, and people have been using temporary bath-houses built by the Self-Defense Force.
Ms. SAITO said, “The problem we’re facing is that elderly people living alone tend to be isolated. They have no means of letting others know when they’re in trouble.” Ms. SAITO and her neighbors have divided the area into several groups so that each group’s leader can bring supplies back from evacuation centers for distribution to elderly survivors. “Normally neighbors would do more to care for the elderly, but under the current circumstances it’s as much as people can do to take care of themselves,” she said. However, even in these difficult conditions, people are helping and supporting one another as much as they can.
In addition to those living in damaged houses, people whose houses have not been directly affected are facing a number of difficulties, including disrupted infrastructure and inadequate relief supplies. AAR JAPAN is making efforts to ensure that adequate support reaches these people. 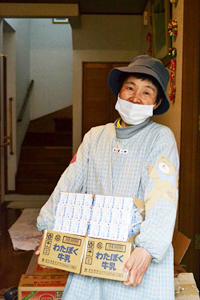