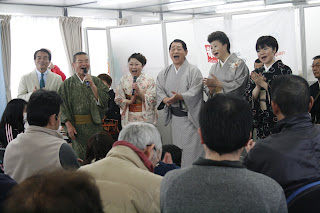 Mr. Nekohachi EDOYA IV, who is known for his performance of mimicking animals, has been conducting a tour along with other folk singers to cheer up those who live in the disaster areas of Iwate, Miyagi and Fukushima. AAR Japan has been supporting the operation of the tour "Don't Give Up, Northeastern Japan – It’s All About Folk Songs - : Entertainer Nekohachi EDOYA and Folk Singers Cheer up the Spirit of People in Disaster Areas". The following is a report by Natsuki MATSUMOTO from AAR Japan Tokyo Office, who accompanied the Miyagi tour from January 21st to 24th, 2013.
Bringing Smiles to the Faces of More Than 600 people in 14 Venues
The Miyagi tour covered 14 different venues in just four days. The venues included community centers and temporary housings in Kesennuma City, Ishinomaki City, Higashimatsushima City and Onagawa Town. All of the venues were packed with people before the performance, and some of the venues were too packed to accommodate everyone who came.
"Many of you may be going through difficult times right now, but today please laugh and enjoy yourselves as much as you can, "Mr. Nekohachi told the audience."We have been waiting for you," responded the audience with smiles on their faces. Many clapped their hands and sang the local folk songs along with the folk singers."Hō-hokekyo!" Mr. Nekohachi mimicked a bush-warbler as the folk singer Ms. Keiko CHIDA sang the line "Uguisu wa ei sah koe ga ii ... (“Bush-warbler warbles beautifully ...” from folk song Miyagi Tanarashi Uta)," triggering loud laughter and applause from the audience. Some audience members got up and started singing and dancing when the last song "Tairyo Utaikomi (a local folk song of Miyagi)" began. People thanked the entertainers after the performance, saying "That was great! We'd love to have you again." Another said, "We much prefer folk music to what's popular among younger people." 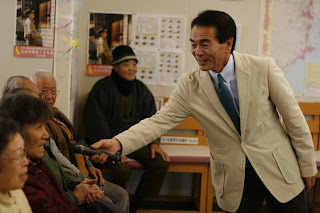 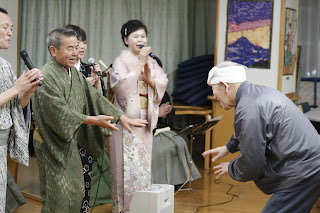 24 January 2013 – The audience not only sang along with the folk song of Miyagi "Tairyo Utaikomi," but even started dancing to the music (Onagawa Regional Welfare Center 2F Hall, Onagawa Town, Miyagi) 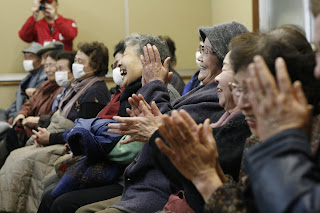 24 January 2013 -Mr. Nekohachi made the audience laugh with his lilting speech. "We haven't had an event like this in a while," said one of the audience members. A greater joy was felt at this venue, where the audiences were largely evacuees who were staying in government-subsidized housings or had returned to live in their own houses. (Onagawa Working Youth Center Judo Hall, Onagawa Town, Miyagi) 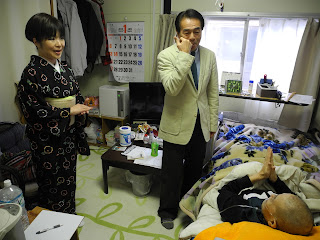 22 January 2013 - Mr. Nekohachi (center) visited people who could not make it to the event due to sickness. He mimicked a bush-warbler while Ms. Keiko CHIDA (left) sang a folk song. (Koyo Temporary Housing Complex, Ishinomaki City, Miyagi) 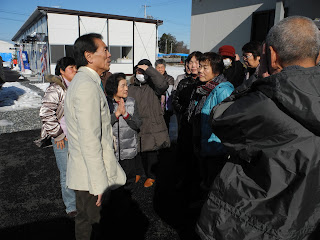 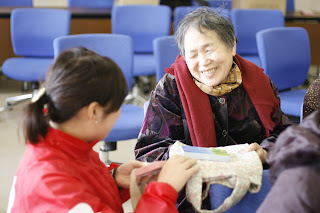 21 January 2013 -"How sweet of you. Thank you!" Before the performance started at Oshima Community Center, we handed people chocolates with encouragement messages attached in handmade tote bags that were sent to AAR Japan from all over the country. The person in front is Yumiko YAMASHITA from AAR Japan Tokyo office. (Kesennuma City, Miyagi)
"Folk music reflects the heart of Japanese people," said Mr. Nekohachi. "Listening to it and singing it out loud energizes me like nothing else does. We may go through tough times or frustrating situations, but it's important not to let it get us down. I hope that what I do will encourage the people living in the disaster areas to stay strong."
Mr. Nekohachi has been encouraging people in the disaster areas and bringing smiles to their faces with his performance since the first performance in April 2011, which was conducted at an elementary school and an evacuation center in Oshika Peninsula in Ishinomaki, Miyagi with the support of AAR Japan.
※ The tour in Miyagi was conducted with your generous donations and a grant received from Caritas Germany.
Tokyo Office Natsuki MATSUMOTO [Reporter]


In charge of PR at the Tokyo Headquarters Office since April 2012.
Graduated from university and progressed to graduate school, while working with the UN as an intern. Joined AAR Japan after graduating from MA course. (Profile at time of publication)