On Tuesday, December 6th, Mr. Atsushi MIYAZAKI’s memorial service was held at Nippon-Seinenkan (Shinjuku Tokyo). Over 222 people were present at the service, including Mr. MIYAZAKI’s family, Mr. Ali BABACAN, Deputy Prime Minister of Turkey, Mr. Kazuyuki HAMADA, Parliamentary Vice-Minister for Foreign Affairs, representatives from Turkey, supporters, friends of Mr. MIYAZAKI, and representatives of NGOs. We also received many messages of condolence and flower offerings. We would like to thank those who attended and also those who made this memorial service possible.
Below is the words of condolence from Mr. Ali BABACAN, Deputy Prime Minister of Turkey.

On November 10th, 2011, Mr. Atsushi MIYAZAKI unfortunately passed away when a building collapsed following an aftershock. It was extremely heartbreaking to be notified of this tragedy. On behalf of all Turkish citizens, I would like to convey my sincerest condolences to Mr. MIYAZAKI’s family as well as to the Japanese citizens, and send my prayers to Mr. MIYAZAKI. 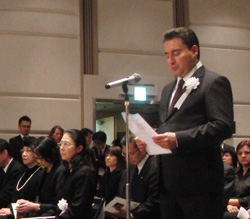 His commitment to assist the earthquake victims in Van Province is a genuine representation of the historic friendship between Turkey and Japan. The placing of the Turkish national flag on Mr. MIYAZAKI at the time of his departure from this world was an extremely meaningful act for us. With Mr. MIYAZAKI in our hearts, and always bearing in mind that the most important thing for the two countries’ relationship is true friendship between their citizens, we are tasked with the mission to strive forward.
I am certain that Mr. MIYAZAKI’s selfless act will forever be remembered by the citizens of both nations. I pray that his gentle soul rests in peace.
I would like to take this opportunity to once again thank the Japanese government and the Japanese people for their great amount of support following the disaster in Van. Today, I stand before all of you as well as the spirit of Mr. MIYAZAKI, and express my deepest condolences to his family.
投稿者 aarjapan 時刻: 11:20 AM