On Tuesday, December 6th, Mr. Atsushi MIYAZAKI’s memorial service was held at Nippon-Seinenkan (Shinjuku Tokyo). Over 222 people were present at the service, including Mr. MIYAZAKI’s family, Mr. Ali BABACAN, Deputy Prime Minister of Turkey, Mr. Kazuyuki HAMADA, Parliamentary Vice-Minister for Foreign Affairs, representatives from Turkey, supporters, friends of Mr. MIYAZAKI, and representatives of NGOs. We also received many messages of condolence and flower offerings. We would like to thank those who attended and also those who made this memorial service possible.

A famous writer once said “We make a living by what we get; we make a life by what we give”.
I think this is the best sentence that explains your personality. You were the one who came to Turkey to help the earthquake victims all the way from Japan.  You were the one who went to the poorest villages just to find the victims who are in need of help the most.
During the period you were in Van, you personally tried to contact people, even learnt some Turkish words from your Turkish book and treated everybody in a nice, caring way.
You cared about giving more than getting.  In return you were able to have a good night sleep, thinking about your good deeds until the night of November 9th. 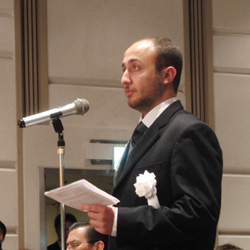 I also want to tell some nice anecdotes that we had.  2 days before the sad event we went to the barber shop to get your hair cut.  We tried hard to convince you as your hair got really long there, even when you were wearing the AAR cap your hair was coming everywhere out of the cap.  Finally you said okay let’s go.  And then You, Miyuki, I, and the driver, whom you called “Babam” (meaning “my father” in Turkish) went there and you took your glasses out and sat there to have the hair cut.  When the barber started you were first little excited not knowing how the barber will cut the hair.  I told you: “Miyazaki-san, don’t worry I will tell him to do it good and you will be handsome at the end”.  After some time the barber turned to me and asked if you were sleeping as you weren’t saying anything just standing still.  After that you said that you are not sleeping but you can’t see without your glasses.  So it was a total surprise for you at the end how your hair would look.  Anyway, you and everybody liked your new hair style.  And Babam (the driver) even said that he should find you a Turkish woman to marry and you said that you would love that.
You liked this idea as you would want to live in Turkey and as you also loved the Turkish food there.
We had some nice plans.  You were going to come to Izmir, where I live and I was going to show you beautiful stuff in Izmir introducing you as a rich Japanese businessman.
But unfortunately you left the world too early.
You were an honest, hardworking man with a great sense of humor.
In closing I would like to tell condolences of the whole of Turkey. We are sad not to have you with us anymore.
I wish strength and patience to your family and to all your beloved ones. We share their grief.
Atsushi Miyazaki, thank you for being part of our lives.  We are all going to miss you.
Arigato
December 6th, 2011
Serbay Ekinoğlu
投稿者 aarjapan 時刻: 3:01 PM