Western Japan Flood: “Too tired to even drink water”, “We need to provide relief to the children as soon as possible”, Evacuees say as we provided various relief supplies and listened to their needs

The smell of rubble and garbage worsened from consecutive days of extreme heat in Kurashiki city of Mabi-cho district (Okayama prefecture). It seems that waste collects in streets much faster than the speed at which Japan’s Self-Defense Force and welfare groups are able to clean it. The existing disposal area does not provide sufficient space to accommodate the storage and disposal of waste, so mountains of waste, as tall as adults, have accumulated on road sides. 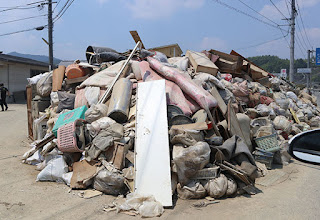 
Volunteers must wear long-sleeve shirts, full-length trousers, boots, and masks to avoid inhaling dust. The extreme heat is draining the mental and physical strength of volunteers. AAR’s emergency assistance team visited waste collection sites and welfare centers and found that there was a need for coolants, detergents, towels, boots, electric fans, etc., so will be delivering those supplies to evacuation centers. 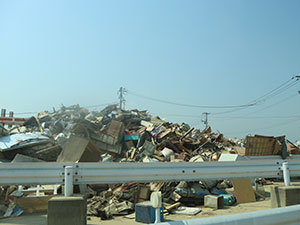 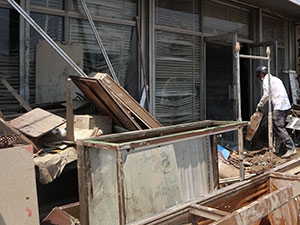 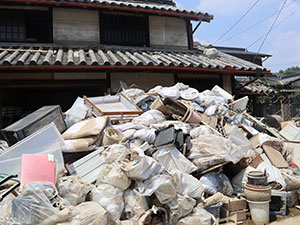 [Waste can be found everywhere in the city, obstructing paths (15th July, 2018)] 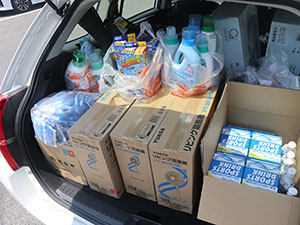 [AAR will distribute items in need such as detergent and coolants (15th July, 2018)]

Many evacuees voiced the opinion that they were "tired of drinking water." Since the disaster, most of the beverages delivered to evacuation centers was water. Evacuees must drink a considerable amount of water to stay hydrated in the intense heat. It would be fatal if evacuees became dehydrated as a result of getting tired of ingesting water. For this reason, we also delivered powdered sports drinks and Calpis to welfare centers.

Visiting the Affected Welfare Centers One by One

When a disaster such as earthquakes or floods occurs, AAR’s primary focus is providing aid to the elderly and persons with disabilities. When we visited “Strawberry House/Nap”, an employment services organization for people with disabilities in Ma-bi cho, the organization’s representative Momoyo Naito-san was cleaning the facility with volunteers. Naito-san greeted us and welcomed us to sit on wet benches covered with clean and dry sandbag bags. 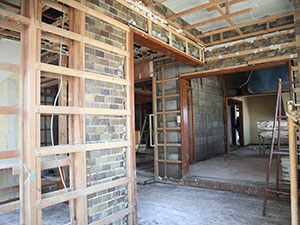 Only the beams of the building remained on the first floor (15th July, 2018)] 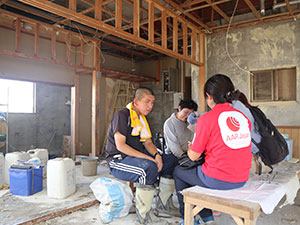 At the time of the disaster, Naito-san could not return home because of the increasingly heavy downpour. Water rushed in and flooded the three-story workshop building up to the second-floor entrance. Naito-san and three others- two facility members and one employee- waited for rescue. When Japan’s Self-Defense Force came to rescue victims trapped in neighboring buildings, Naito-san frantically shone the light they had to have their presence noticed.  "I felt responsible for the lives of the two facility members, rather than myself, and was very desperate,” Naito-san said.

“Minna Farm”, an employment support group for people with disabilities that sells flowers and vegetables, stated that although the equipment used to grow vegetables were not carried away by the flood, the summer vegetables that were close to harvest were completely destroyed. The staff of Minna Farm were concerned that the disabled that were employed would be jobless in the near future since there were no longer vegetables and flowers to harvest and sell. At the same time, the staff are focusing all their efforts on removing the rubble and mud that they did not have the capacity to think about the future. 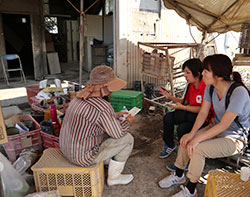 [Furniture had been washed away, so baskets were used instead of chairs (15th July, 2018)]

On July 16, we visited the staff at the welfare center in Ma-bi cho to understand the kind of aid in need. We learnt of the urgent need to restart a facility where children with disabilities can be entrusted. There are 13 children enrolled in “Hoharu,” a daycare service center that provides education to children with disabilities from first to third grade elementary school during after-school hours. Hoharu’s facility was flooded with 3.8 meters of water due to the heavy rain and is currently inaccessible. 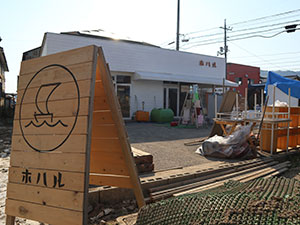 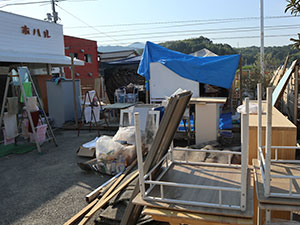 "The flood has caused a lot of children to be in a panic. Screaming children are not welcome at evacuation centers such as gymnasiums. Parents attending to those children do not have the capacity to clean up their homes. After hearing the children say "I want to go to Hoharu soon!" Takizawa-san (Hoharu staff) said he is determined to reopen Hoharu as soon as possible, and has been working on restoring the facility. We delivered supplies to support Hoharu immediately, including rubber gloves, laundry detergent and sports drinks.

The evacuation center at Nima Elementary School (a public school in Kurashiki city) ran out of clothes and the evacuees have not been able to bathe frequently enough. People are suffering from heat rash. We delivered 10 boxes, or 680 units of wipes to treat the heat rash, donated by Yusukin Pharmaceutical Co., Ltd. to Nima Elementary School. Kanzaki Kin-sama, a member of the Nima District Town Building Promotion Council responsible for the evacuation centre, was pleased because of the immediate effect of the wipes. On July 14, we delivered 400 traditional Toraya yokan (Japanese sweets) provided by Kogen Co., Ltd. 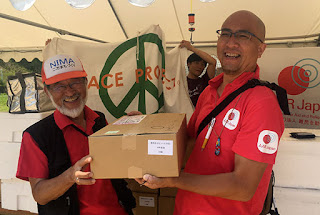 At the soup kitchen on July 15th, we prepared 250 servings of wheat noodles and picked cucumber for lunch, and 250 servings of summer vegetable beef curry and wheat noodles for dinner. Local volunteers have been volunteering their time at soup kitchens since July 10 at other evacuation centers. Some people have been cooking more food than usual at home so that they can support their friends who are evacuees because they cannot not lend a helping hand to friends affected by the flood.

Despite being fatigued by the unyielding heat, evacuees appear a little more light-hearted at the sight of many volunteers rushing from all over the country during the three-day weekend (16 July was a public holiday celebrating Marine Day). The Japan Disaster Rehabilitation Assistance Team (JRAT) is leading initiatives such as scheduled exercise programs and access to massage professionals; living conditions are gradually improving. AAR will continue to listen to the voices of the evacuees and deliver the aid they need. Thank you for your support.