AAR JAPAN has sent an emergency relief team of seven personnel to support the survivors of the Great East Japan Earthquake.
On March 19, the Team distributed the relief items at No.2 Elementary School in Onagawa, one of the harbor towns in the eastern Miyagi Prefecture heavily damaged by the Tsunami.
>Approximately 1,500 local residents are taking refuge in the school building and its gymnasium. The Team headed east from the Sendai base after receiving information from the Emergency Headquarters of the Miyagi Prefectural Government that the evacuees in this school were having a serious shortage of daily supplies including diapers and underwear.
7,200 Diapers, 200 Pairs of Underwear, etc. Given Out

On arriving at the school, the Team got immediately onto unloading. Local volunteers and servicemen of the Japan Self Defense Force provided helping hands. The inventory of the relief items included 7,200 diapers, 200 pairs of ladies’ underwear, 40 sets of antiseptic alcohol, 1,000 toothbrushes, 50 blankets, 4 cans of milk, etc. The procurement and transportation of these items were made possible with the generous cooperation extended to AAR JAPAN from MontBell, a Japanese outdoor product company.

The evacuees were in need of everything. Mothers with small children were especially in trouble with a lack of diapers. A member of the Emergency Headquarters of Onagawa Municipal Office told the Team that the consistent provision of the consumables was required. Some evacuees also said that blankets were not enough to keep them warm enough, and some of them were beginning to feel sick. A week after the Quake, mountains behind them were thinly covered with snow.

Memories Washed Away, Loved Ones Still Missing
Passing through the town of Onagawa, what I saw was simply hard to believe. Both sides of the road were filled with all kinds of debris. The horrifying piles stretched out into the distance. Several hundred meters from the coastline, a wreckage of disfigured train lay among the houses stuck upon each other, smashed into smithereens. The remnants of ordinary, happy lives in an otherwise peaceful rural town scattered everywhere.
A man was walking along the road with a piece of cardboard hanged from his neck like a necklace. The cardboard carried a message that he was looking for his missing family members. It was an unbearable sight. The plight of the survivors made me feel powerless; I forced myself to concentrate on what needs to be done from now.
Speed Is the Key
I have, in the past, engaged myself in several disaster relief activities in Myanmar (Burma), Pakistan, Indonesia, etc. The Great East Japan Earthquake this time, however, has a different meaning in terms of the magnitude of the damages and the fact that it struck the area close to the place I grew up. What is required at this moment is to bring supplies to the survivors as quickly as possible.
AAR JAPAN will continue to operate in the disaster-hit area, especially in places where little assistance has reached. I call for AAR JAPAN supporters to cooperate in rebuilding the future of the survivors. Your contribution will be highly appreciated. 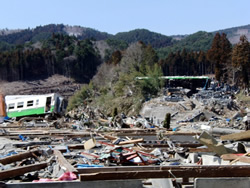